Big Business spends big money in Washington to influence members of Congress and push their anti-worker plans. They outspend working families on politics by more than 15-1.

Through political action and aggressive lobbying on Capitol Hill and in State Houses and City Halls across America, Teamsters have stopped some of the worst attacks on working people.

But Big Business is pushing their agenda harder than ever. That means we have to fight back stronger than ever. And we have to move forward with our own programs, like improving job safety, fighting for affordable childcare, and stopping abuses by corporate health providers and insurance companies.

You can take a stand for working families by contributing to DRIVE – the Teamsters’ political action committee. Your contribution will support grassroots action by Teamster families to stand up to Big Business interests.Your membership to DRIVE will help elect political candidates who care about working people.

Contributions to DRIVE support a wide range of Teamster activities:

In 1959, The Teamsters recognized the need to develop comprehensive legislative and political programs within the union following the passage of the Landrum-Griffin bill and other anti-labor legislation.

In November of that year, James R. Hoffa established the Department of Legislation and Political Education. Hoffa called for the department to develop a political action program with member support. D.R.I.V.E. — Democratic, Republican, Independent Voter Education — is born.

D.R.I.V.E. committees are formed to meet those goals through activities such as screening and recommending favorable candidates, launching registration drives and developing plans for get-out-the-vote campaigns in primary and general elections. Funding is strictly voluntary and kept separate from dues.

Sid Zagri, D.R.I.V.E.’s first director, quickly realizes that one of the best resources the union has is wives and women members, who had a long history as political organizers. He develops a partnership with Josephine Hoffa, wife of the General President, to create a women’s auxiliary political action program. The ultimate goal was to have a major auxiliary in every Joint Council and make each D.R.I.V.E. unit a political force at the precinct and block level.

Mrs. Hoffa had seen her husband and others physically beaten and subjected to unfair court battles as they tried to improve workers lives. She knew unions could only hold on against tough odds by active participation and constant vigilance. She was one of the first to see that political action was the best defense against the erosion of worker rights in the 1950’s.

“Labor’s enemies don’t stop for lunch — so neither can we,” she said.

She knew taking on a task like D.R.I.V.E. was not for the faint hearted. Many women seemed to not care at all about political issues. Many did not even vote.

She traveled from city to city in 1960 and early 1961 attending rallies that only a handful of people would attend. She and her family were subjected to negative editorials and nasty editorial cartoons for her actions, but she never stopped trying to create D.R.I.V.E. groups.

“Labor unions were not built by men and women who got their feelings hurt or quit after the first disappointment,” she said.

On April 9, 1961, James R. Hoffa conducted the largest telephone conference to date, speaking with more than 1 million members. His message about D.R.I.V.E. and encouragement for women’s committees was wired into meeting halls and theaters in more than 170 cities.

Included in the activities kits were the “DRIVE Goes to a Party” hostess packets. Teamster women were asked to host neighborhood parties and talk about the goals of D.R.I.V.E. — and discuss issues relating directly to their families and communities. They then would teach friends and neighbors at the party how to get voter registration drives and other activities started in their wards and precincts.

The party idea was very well received by D.R.I.V.E. members and the parties were successful in neighborhoods across the country.

Mrs. Hoffa’s most important achievement was the D.R.I.V.E. motorcades held throughout the 1960s. 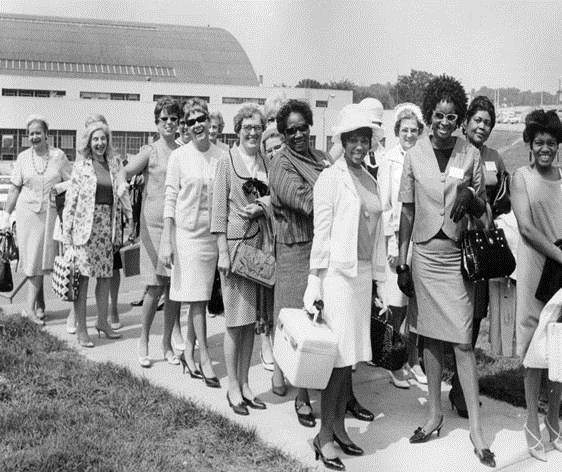 Between 1962 and 1968, more than 15,000 women delegates from Teamster joint councils, state conferences and auxiliaries — women of all races, and from different neighborhoods and states– boarded buses and traveled for hours to speak with their senators and representatives about labor and social justice issues.

When they returned home, the women visited schools, churches and even went house to house to talk about the experience and give an evaluation of how well the politicians understood or were meeting local community needs.

At first leaders on Capitol Hill brushed off the women, but later came to respect their dedication and knowledge. 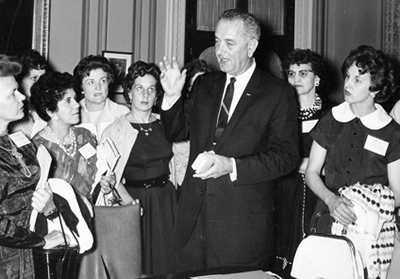 The women also were not shy about holding senators and representatives accountable for their campaign promises. Especially daunting for the politicians were the Teamster “Scoring banquets” held in Washington. D.R.I.V.E. delegates would get up one at a time and rate politicians’ voting records — often with the spotlighted senator or congressman seated at the table. The press loved the events and attended in large numbers.

D.R.I.V.E. quickly became one of the strongest political action groups in the country and remains so today.

A 1963 Business Weekmagazine quotes an anti-labor congressman as saying: “We may not like those D.R.I.V.E. women, but they are effective.”

Changes in the workforce, deregulation and economic hard times led to a drop in D.R.I.V.E. Motorcades and other activities, but the program kept going despite the difficulties.

Teamsters still fight anti-labor legislation through D.R.I.V.E. and work hard to protect all working families. The Teamsters have honed their political skills greatly in the decades since D.R.I.V.E. was formed and have become a leading voice for workers in Washington. But, D.R.I.V.E stays true to its principles and still depends on voluntary member support for funding; it still uses rank-and-file grassroots activities to achieve its goals.