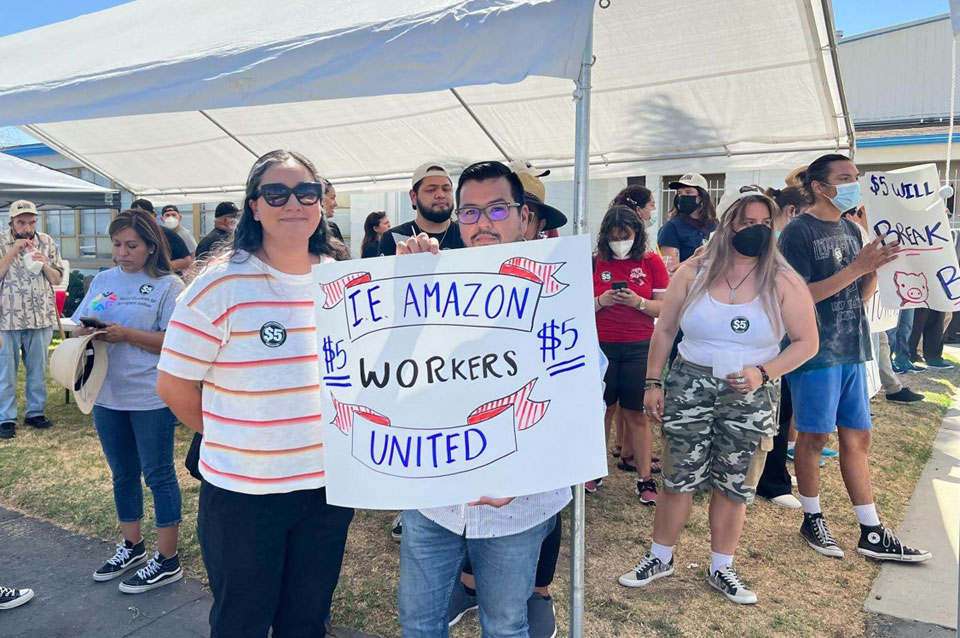 SAN BERNARDINO, Calif. (PAI)—Upset with low pay and dangerous indoor heat which Amazon refuses to solve, more than 125 workers at its key San Bernardino, Calif., 24/7 warehouse walked off the job on August 17.

The walkout followed a petition to Amazon management, signed by 800-900 workers—a majority–demanding a $5 an hour raise in base pay, to $22, and, more importantly, something more than just one “cool room” inside the KSBD warehouse, where high heat is a danger in the desert-surrounded facility.

That day, on the other side of the U.S., the grass-roots, independent Amazon Labor Union filed a National Labor Relations Board union recognition election petition covering 400 workers at Amazon’s ALB1 warehouse on U.S. 9 in Castleton-on-Hudson, N.Y., south of the state capital, Albany. The petition covers warehouse workers, not truckers, temps or others.

ALU already has one win against the monster firm, which now employs more than half a million people in the U.S., and its owner, Jeff Bezos, one of the nation’s three richest men. ALU won decisively at Amazon’s JFK1 warehouse in Staten Island, but Amazon challenged the vote. It alleges the NLRB’s Brooklyn, N.Y., regional office  illegally “tilted” the election in the union’s favor. ALU lost at a smaller Staten Island warehouse. It states company labor law-breaking skewed those results. The challenges were combined in a hearing at the NLRB regional office in Phoenix.

The California activism is important because the San Bernardino is one of only three Amazon “air hubs” in the U.S. and it handles, right now, 14 flights a day, shipping goods in and out around the country. Amazon wants to double that number. Meanwhile, its workers suffer.

“We work at KSBD, @amazon’s air hub in San Bernardino, where temperatures soar above 95°. Over 800 of us signed a petition for higher pay, safer working conditions, and an end to retaliation for speaking up. Amazon refused, so today we walked out,” tweeted the group, @ieamazonworkers.

So far Amazon has neither replied to the petition nor acknowledged the demands from Inland Empire Amazon Workers United. Aided by Ontario, Calif.-based Western Workers Resource Center, the workers are also investigating unionization in San Bernardino. And that center also helped their cause by publicizing a Strategic Organizing Center report earlier this year, The Injury Machine. It showed Amazon’s company-wide job injury rate reported to the Occupational Safety Administration over the last five years was 7.4 serious injuries per 100,000 workers, compared to a warehouse industry average of 4/100,000.

“KSBD opened in March 2021 amidst community concern and opposition about job quality and air pollution,” the worker center added. “Amazon promised quality jobs, but has failed to deliver. Since the opening, workers have organized in response to low pay, illness-inducing heat, and brutal working conditions. In addition to a new rest area, workers have also won an increase in pay for night shifts.

“These Amazon workers are leading a local movement to demand higher standards from Amazon, the region’s and California’s largest private sector employer.”

“Working in the heat feels like you are suffocating.. You need to take breaks and you can overheat really easily. They don’t make it easy to take breaks to allow your body to cool down,” Amazon warehouse worker Melissa Ojeda told the worker center. Added worker Anna Ortega: “We are walking off the job to improve working conditions at Amazon and protect ourselves from injury and retaliation.”

and prevalence of robotics technology only heightens pressure on workers and fuels the nation’s second-largest private employer’s alarming injury rates, despite Amazon executives’ promises to improve safety at its warehouses.”

“And Amazon spent millions of dollars to mislead the public about the reality in their warehouses. The company’s obsession with speed is crushing tens of thousands of workers each year, and Amazon seems to have no plan to stop.”