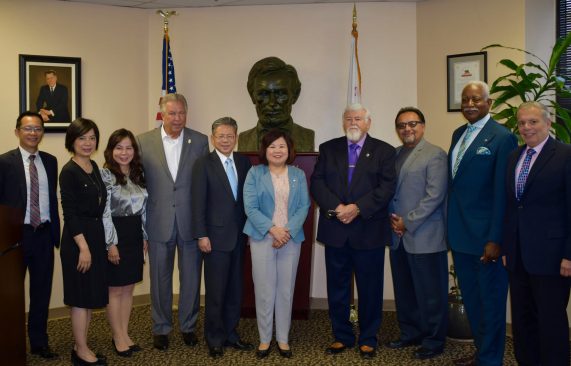 Her delegation wanted to learn techniques and strategy and problem-solving from a unit of America’s strongest Union.

The Minister detailed the new government law in Taiwan requiring one rest day for every seven days that can be worked, however the day must be paid at overtime (2.34 times the hourly rate for the first two hours and 2.67 from the third hour on). The seventh day is considered a mandatory holiday and cannot be worked.  The law reduced the workweek for the private sector from 42 to 40 hours per week and there is an effort to provide the same workweek for the government sector which currently has less holidays.

She was interested in the Teamster method of governing as compared to other Unions that allowed their officers to work for their employers while servicing their members.  She asked about industry-based vs multiple craft Locals. President Cammack said “the Teamster method avoids conflict with the employers and by representing multiple crafts it requires the Locals to be hands-on, providing better representation.”

Taiwan would like to help Unions grow stronger and more powerful through continued negotiation of better contracts and working conditions. She understands what the Teamsters have known for many years, that Unions help provide better working conditions for the public as well as their members.

Minister Hsu discussed the relationship between Taiwan and the U.S. regarding trade and cargo, the effect of independent contractors, the companies in the harbor, temp agencies, owner-operators, etc., who do nothing to provide a living wage and actually hinder organizing by Unions in both countries.

Minister Hsu and President Cammack agreed that there is great need for both the U.S. and Taiwan to establish a true middle class wage and benefit structure for all workers.