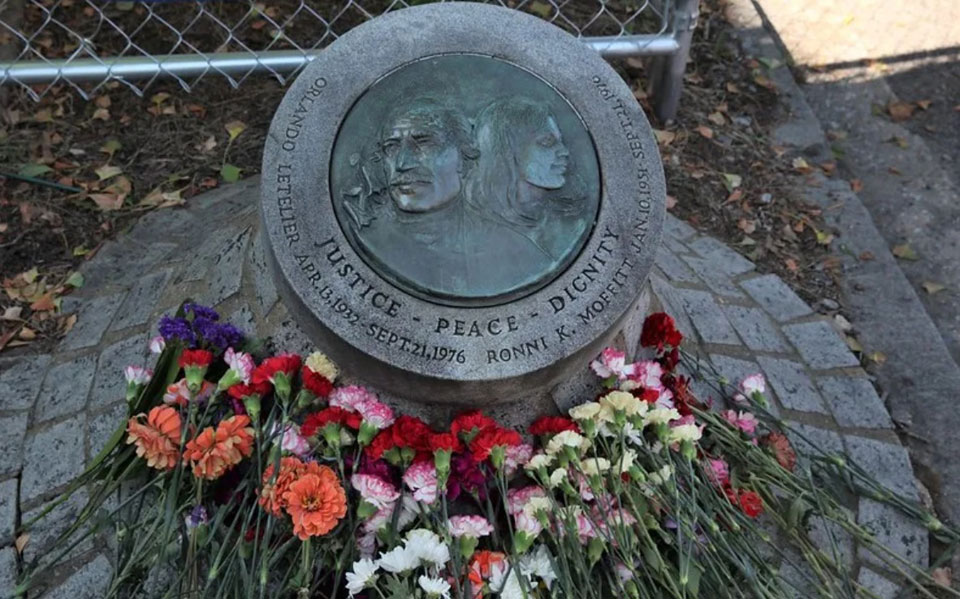 WASHINGTON—Despite “no resources, no money, no guidance” and no mainstream media exposure, “we shocked the world” by defeating behemoth Amazon in the JFK8 union recognition election on Staten Island, Amazon Labor Union co-founder Chris Smalls says.

And the independent union’s win “shocked the labor movement, the country and most important of all the billionaires” determined to lord it over workers and the world, he adds.

Smalls outlined how ALU won the vote as he accepted, on behalf of the union, the Letelier-Moffitt Human Rights Award for domestic organizations from the Institute for Policy Studies, the progressive think tank. The international Letelier-Moffitt award went to a group representing mothers of more than 100,000 Mexican “disappeared” people.

ALU achieved its dominant win at the Staten Island Amazon JFK8 warehouse, starting with just two people—himself and fellow worker Derrick Palmer—figuring out how to fight back against the monster exploitative firm after it illegally fired Smalls for leading a lunchtime walkout at JFK8 in early 2020.

The workers who walked out protested Amazon’s refusal to protect them against the coronavirus, which at that time, Smalls told IPS, was killing one person in New York City every 15 minutes. Amazon is still stonewalling workers on virus information.

Amazon responded by firing Smalls on trumped-up charges that he didn’t warn other workers about the virus. Smalls and Palmer’s solution then began a grass-roots from-the-ground-up worker-led independent union, emphasizing “we’re part of the working class.”

Amazon challenged the union’s win at JFK8 before a National Labor Relations Board (NLRB) hearing officer via zoom hearings to a neutral NLRB office, in Phoenix, Ariz. Its 25 objections said the NLRB was biased in the vote, among other charges. The hearing officer has yet to issue a formal decision, but news reports quote the officer as throwing all 25 out.

“Most Amazon workers are Black and brown and most are ‘essential,’ but they (the company) wouldn’t answer questions” about the coronavirus, Smalls explained. That attitude is held not just by Amazon founder and majority shareholder Jeff Bezos—one of the nation’s three richest people—but by “every major corporation in America.”

“We’ll continue to organize and we’ll continue to fight” for Amazon’s exploited workers, Smalls declared. “There’s still a long way to go and we can’t do it alone,” he added, seeking physical—demonstrations—and financial support.

Indeed, Smalls came to the IPS session after a private meeting with Biden Administration Labor Secretary Marty Walsh, discussing what DOL resources are legal and available for workers.

ALU decided to go it alone in organizing JFK8, without, at that time, institutional support., both out of necessity and because Smalls and Palmer believed their union could be more flexible and able to contact JFK8 workers one-on-one.

“Established unions have done a lot, but there’s been a stalemate” against them under labor law and National Labor Relations Board rulings, he explained. Union organizers can go through the NLRB process, but so can firms when they lose.

The struggle to unionize Amazon, which has drawn worldwide support, continues. The latest: ALU campaigned to unionize about 400 workers at the ALB1 warehouse just south of Albany, N.Y. Balloting occurred October 12-17 with the count scheduled for October 18.

ALU won at JFK8 on April 1, 2,654-2,131. Amazon challenged the victory—despite its rampant labor law-breaking—before a National Labor Relations Board administrative law judge hearing in neutral territory, Phoenix, Ariz. ALU is challenging a loss this year, again due to the company’s illegal actions, at a smaller Staten Island warehouse.

Four mothers whose family members are among the 100,000-plus “disappeared” in Mexico received the international award, representing the Movimento por Nuestros Desaparcidos en Mexico.

The mothers who spoke, in Spanish through a translator, made it clear that under years of one-party rule, plus problems with corruption and cartels, Mexico has a large “disappeared” problem targeting progressives, dissidents, lawyers and journalists. Most of the victims have never been seen again, though one of the four who spoke had been jailed, tortured and released—but only after large sums of cash were handed over.